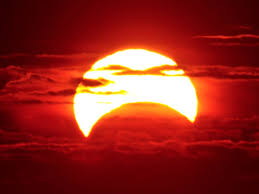 Astronomically, a Solar Eclipse is a pretty incredible event. It’s usually surrounded by a fair amount of intrigue and strong warnings not to look directly at the sun for fear of going blind. But what’s actually going on during a solar eclipse and why is there so much mystery and intrigue around this phenomenon? 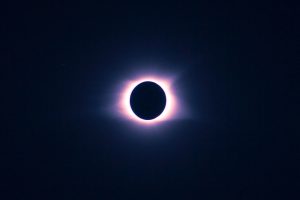 People around the world throughout history have come up with many varied and amazing myths, legends and stories to explain the sun’s disappearance during the night of a solar eclipse. Tales of angry Gods, Viking sky wolves, Korean fire dogs, and celestial reconciliation are some of the more interesting stories that have been recorded throughout history by cultures, world- wide, to explain this astronomical wonder.

In Ancient China, both lunar and solar eclipses were viewed as heavenly signs foretelling the future. Solar eclipses were believed to occur when a legendary celestial Dragon devoured the Sun. Drums and pots were often banged to scare the dragon away.

Ancient Babylonian astronomers made careful notes of the night’s sky, recording the movements of celestial events. For the Greek’s, astronomy was also a central part of their way of life. 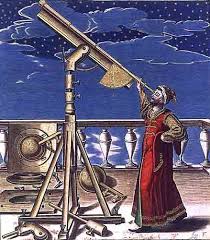 A beautiful example of this can be seen in the fragment of a lost poem by Archilochus (ca. 680–645 BCE), a Greek poet and soldier, as he seems to describe a total solar eclipse.

Nothing there is beyond hope,

nothing that can be sworn impossible,

nothing wonderful, since Zeus,

father of the Olympians,

made night from mid-day,

hiding the light of the shining Sun,

and sore fear came upon men.

Fantastic, mythical beasts aside, what do we know today about the nature of this astronomical event?

A partial solar eclipse occurs when the Moon doesn’t quite line up completely with the Sun, only blocking part of the sunlight reaching the Earth.

So, is there any truth to the claim that it is dangerous to look into the sun during a solar eclipse? The answer is most definitely yes! Eyesight can be significantly damaged by the sun’s infra-red light which is invisible to the eye. This light burns the retina and is particularly destructive when the eye is dilated as a result of the eclipse. The safest way to view the sun during this time is through specifically designed dark glasses, through a digital camera or smartphone.

July is the month for astronomical wonders! On the 13th, we will witness our first Solar Eclipse of the season. This is a time when the Moon passes in front of the Sun and casts a shadow across the Earth. The partial Eclipse will begin at 9:48:23 am with maximum eclipse visible at 11:01:05 am. But an eclipse never comes alone! It will be followed by the longest Total Lunar Eclipse of the 21st century on July 27th, set to last 103 minutes!  Keep your eyes set to the heavens to share in the splendour of these incredible celestial events.