History of the Gong

Historic research provides us with four main centers - Burma, China, Annam, Java - at least 7 gong shapes and sound structures stem from these regions. Only a few families knew the tradition of gong making as it was passed from generation to generation. The art of making gongs was veiled in a sense of magic. 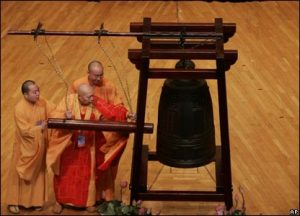 It all started we are told about 6,000 years ago in the Bronze age by a Chinese emperor who had conquered an army and commanded his priests turn the negative weapons of war into symbols of peace and positive vibrations.

An initiatory tool for enlightenment, etheric projection, and exorcism of negative spirits, the gong proclaimed the presence of spiritual royalty, kept the sick from dying, safely transported the deceased to their heavenly home, and was possibly employed in the levitation of heavy stones.

Gong makers believed that a gong could only succeed with the help of higher powers. The gong was an important element in the lives of the people. It still is today. In Asian families, the gong was an attribute of wealth and served as a status symbol. In rites, the gong was used in the evocation of ghosts and in the banning of demons. Touching a gong brought you fortune and strength. In rituals of the Far East, the gong has retained its special significance to this day. Gongs are found in temples, monasteries, private residences, restaurants, and shops. 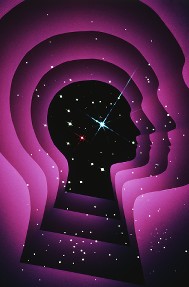 The gong is an engine of power releasing tone resonance and complex harmonics that are transferred to the recipient. It is an etheric opening of fullness. It simulates the paranormal experiences of yogic samadhi ie dematerialisation,levitation,time-lessness, bliss and rejuvenation. It relieves the stress of life and revitalises the immune and nervous system.

Gong tones add together and subtract to create a fullness of sound called functional harmony.The mathematics involved is the Fibannacci Series.In music it is the Resultant Tone Theory. In quantum physics,it is Chaos Theory of Quazi-periodic patterns and 3-dimensional Hologramic Fractalization. Recently, Intense sound waves when focused on a bubble have been found to create a strange blue light called Sono-Luminescence. This appearance around the gongs has often been seen in The Sound Temple by some with the gift of claire-visual.

Gong vibrations are gifts from the universe called:"free energy." Sonar energy comes through the gong in a continuous flow in every direction, emanating from its center. Dane Rudhyar, better-known for his astrological expertise than his musical philosophy, once speculated that a gong would have to be kept sounding for many thousands of years before it would finally dissolve, dematerialize and disappear. His theory was that the atomic lattices, the living particles that make up the gong would finally, after eons of gonging, be spent and burned up through natural friction, causing the gong to disappear. Therefore, as the body of the gong outlives a human by thousands of years, in comparison to our short lives, it is an immortal.

The gong is named after the sound that it makes: it "is" what it "does" which is the prerequisite of being considered a shamanic powertool, likened to the mythic philosopher's stone. Its energy of immortality, and re-youthing attributes, bestow upon us a sustained, heightened curiosity, an important gift that can enhance the quality needed for a productive "late" human life.' It is even possible that the process of aging may be suspended in a gong bath, and because of its element of unresolved suspense, the food of curiosity, is very much in abundance. So it stands to reason that as we soak up the vibrations of gong tones, our youthful curiosity is amply nourished as well.

Cleansing the mind and emotions with gong tones creates a sort of exorcism that results in what we call spontaneous healing and transformation. Initiation, as we know it, is a quickening of the soul which, when we look back along our memory time track, is always recognized as a higher sensory experience. When the senses of hearing and feeling sound are mixed, a blissful mood occurs which science calls "synaesthesia". In this altered state, with our eyes closed, it is possible to behold the Invisible Light of Illumination, and also experience various levels of Samadhi, ecstasy and enlightenment. 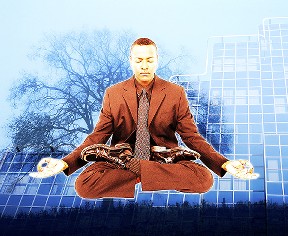 During the gong experience, we are in the completely awake while completely asleep meditative state, what I call the 4th dimensional dreambody. In this state, which is also known as the completely neutral yogic state of "Turiya," we greatly increase the re-youthing efficiency of our innate intelligence that operates 24 hours a day. After a gong tone immersion, when the personal ego returns to material consciousness, one seems better able to attain a condition of non-judgment or neutrality, the quality of total body/mind harmony.

I believe the gong experience improves our spiritual "quality of life" because it imprints the deep sound immersion event with special significance. It is in this mystical mood that we become a vessel for spontaneous creative thought and meaningful insight.

Using the Gong & The Gong Bath 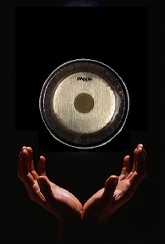 The Paiste Symphonic Gongs have a slightly raised surface with a harmonic and universal sound structure. The fundamental note of the gong is balanced with the instrument's complex overtones. The Symphonic contains even proportions of various gong characteristics, which can be brought forth using different mallets and striking points.

All the gongs being purchased by The Sound Temple now carry the legendary 'Tai Lo' symbol on their face, which indicates the 'Road to Happiness". This is the message created by the Chinese as the main purpose for the existence of the Gong! 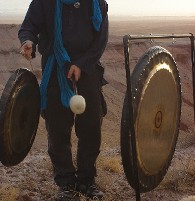 A Gong Bath (also has been referred to as a Gong Meditation or Gong Savasana) usually entails some gentle movement and breath work. Then in a standing, reclining or seated position, the receivers are “bathed” in the sound of the gong, this can be achieved en-mass or individually.

The sound is organic, deep and nurturing. The “living tones” build upon each other and evolve on their own, producing a sea of sound that is both timeless and alive. We not only hear the sound through our ears but through our bodies. Affecting us at the deepest cellular levels. Within this experience, tensions are released, blockages cleared, and the mind is able to stop its chattering.

Many people experiencing a Gong Bath have reported a 'release', this can take the form of an emotional, mental or physical reaction and it is the vibrations working on the energy centres within the body (Chakra's) and re-aligning them. It is regarded as a gift and those fortunate to receive it, usually experience a deep sense of well-being following the session.