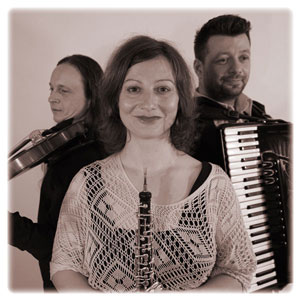 Eva Jurgec is a classically trained musician and composer of contemporary, world, and experimental music with an interest in the confluence of music with poetry, image and movement.

A graduate of the Academy of Music in Ljubljana in Slovenia, Eva won the prestigious youth Presernova Award for excellence in musical studies and for her mastery of the oboe.

She has wide experience in playing in symphony orchestras; wind orchestras and chamber music groups in Slovenia. Her ability to improvise and create powerful mood music for theatre has been utilised by directors – she created improvised stage music for the National Theatre of Slovenia (including music for the award winning production of The Storm directed by J. Lorenzi), and the director R. Sultanov engaged her for the puppet show ‘Gulliver’s Travels’ where she co-composed the musical landscape for the show.

Uros Jezdic is a musician and performer based in Ljubljana, Slovenia. As a master practitioner of Balkan ethno music he has been both a preserver and an innovator with the form. He trained at the Dragan Vasović Vaske Music School in Belgrade and has travelled extensively in Europe, playing the accordion with gypsy musicians in Romania, Macedonia, Bulgaria and Turkey.

He performed with the groups Klarinetno, Langa, Sukar A’quard Quartet, Autetno Project, and taught Balkan music at the World Music School Helsinki. Uros has performed with ensembles for major stage productions at the Slovenian National Theatre, Cankarjev Dom Hall of Culture and Puppet Theatre of Ljubljana.

Klemen Bracko is a virtuoso violinist who has played in all Slovenian symphonic and opera orchestras since 1999.
He was the artistic director and soloist for Symbolic Orchestra, which toured Europe premiering his compositions and performing at the opening of the European Capital of Culture in Murska Sobota.
Klemen creates music for film and theatre: Ljubljana City Theatre, Theatre Koper, Slovenian Theatre in Trieste, and collaborates with notable Slovenian artists and institutions including Svetlana Makarovic and Vita Mavric.

We welcome “The Folk Embassy” to Perth Hills as part of the visit to WA by a number of amazing Slovenian performers. During their time in Perth, they will be performing an Australian/Slovenian coproduction called “Somnus”. Here at The Sound Temple, we are committed to offering opportunities for talented artists from around the world.